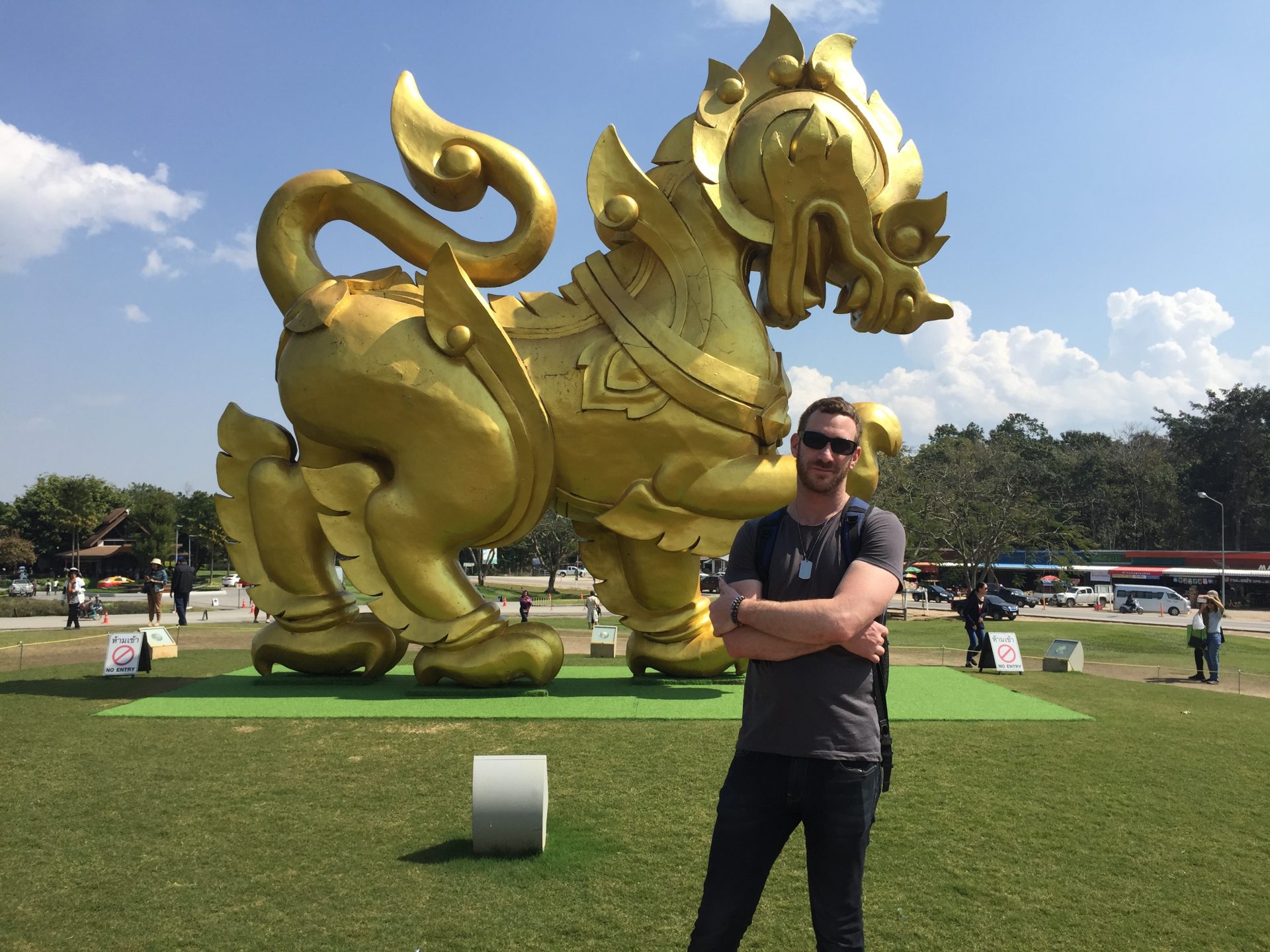 I may have only spent 2 days in Chiang Rai, but it was so amazing that I consider it my favorite city in Thailand out of the 5 I’ve been to.  I was so lucky to have perfect weather throughout this whole trip as well.  The sun was always shining and it wasn’t too hot.  What more could I ask for?  Maybe some temples, street food and an awesome time enjoying the sites!

So even though I only spent a day and a half back in Chiang Mai after my trip to Pai, I decided to get back on the motorbike and take the five and a half hour trip to Chiang Rai.  The trip was a little easier since there weren’t as many twists and turns, but it felt like an eternity before I finally arrived.

After checking into the hotel a few blocks away, the first thing I did was go and see the clock tower.  It’s known for its architecture and the fact that it changes colors when it goes off.  This only happens 3 times a day.  Which is at 7, 8, and 9 PM on the hour.  The tower also serves as the centerpiece for the traffic roundabout during the day.

Once I finished checking out the clocktower, I headed over to the night market.  This was easily the biggest night market I had been to up to this point.  I particularly liked it for the really cool artistic postcards and all the handcrafted stuff they were selling.  The food was also amazing and I tried my first hot pot there.  A hot pot is where they place the pot in the middle of the table with the flame underneath.  As it heats up you put the ingredients in and watch it cook.  It was really good!  I left with a few gifts to send home to the family as well. 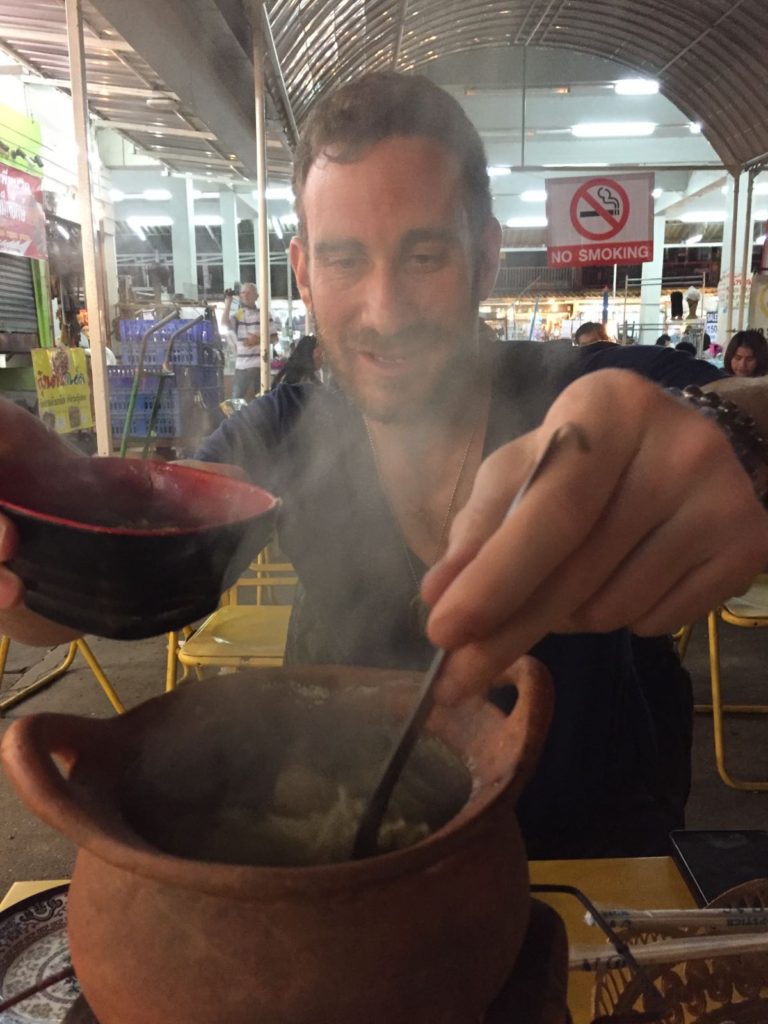 The White Temple, also known as Wat Rong Khun was the entire reason I traveled to Chiang Rai in the first place.  I had seen pictures and heard about it for a while but it really doesn’t do it justice.  The famous visual artist who designed this, Chalermchai Kositpipat, also designed the clocktower.  I was seriously amazed by it.  I had seen a lot of temples at this point and couldn’t look at any the same after that.  The design is really all about good versus evil.  It even has images of George W. Bush and Bin Laden in its design.  Very interesting and I wouldn’t miss this one!

The cost for entrance is 50 Baht ($1.40 USD).  Make sure not to wear any revealing clothing and to be respectful.  Remove your shoes before entering and there is no photography allowed inside the temple.  When you pay the entrance fee, make sure to sign for the souvenir book that gives you the history of the temple. 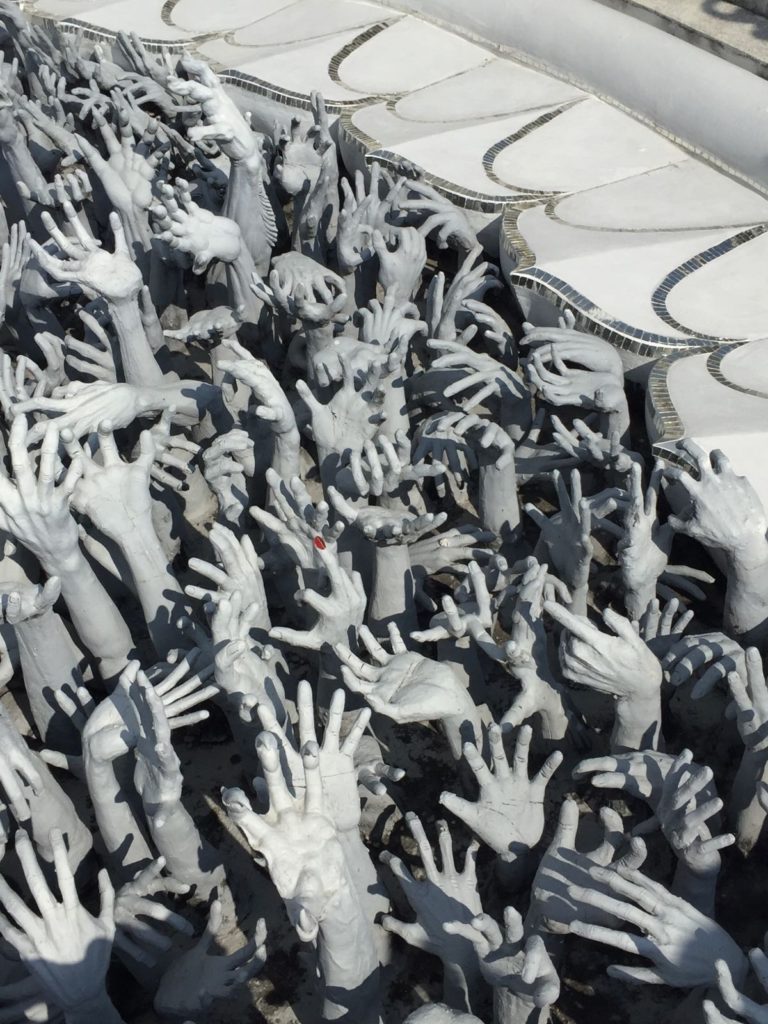 Singha Park was my next stop.  If you don’t know, Singha is a Thai beer.  I equate it to the Budweiser of Thailand.  Not in reference to the taste, but as far as popularity.  Everyone in Thailand knows what Singha is.  The logo is a golden dragon and there is a giant statue of it erected right in the center of the park for all to see. 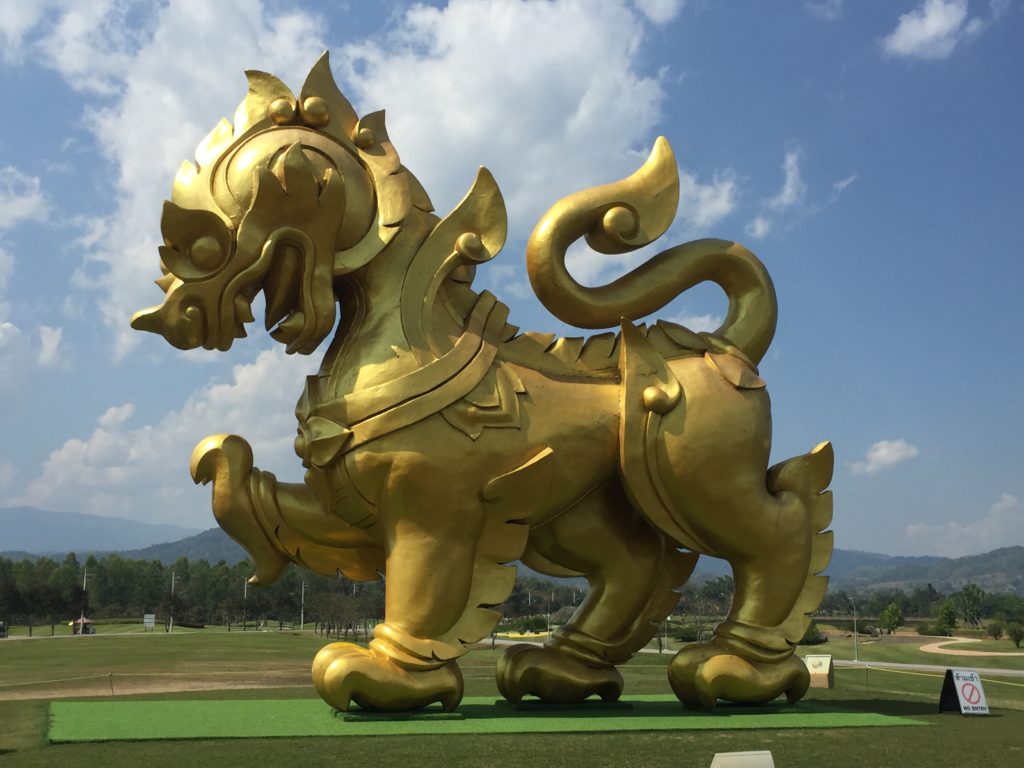 I would say Singha Park is most famous for the Balloon Festival they do every year on Valentine’s Day.  The park has lots of activities and events from tours to ziplining and even a small zoo.  Most of them are pricey by Thai standards, but you can rent bicycles and check out the scenery as well.

Luckily I had the motorbike and got to see how beautiful it really was.  The weather was seriously awesome and the viewpoint there is amazing.  It overlooks the tea plantation with a view of the lake. 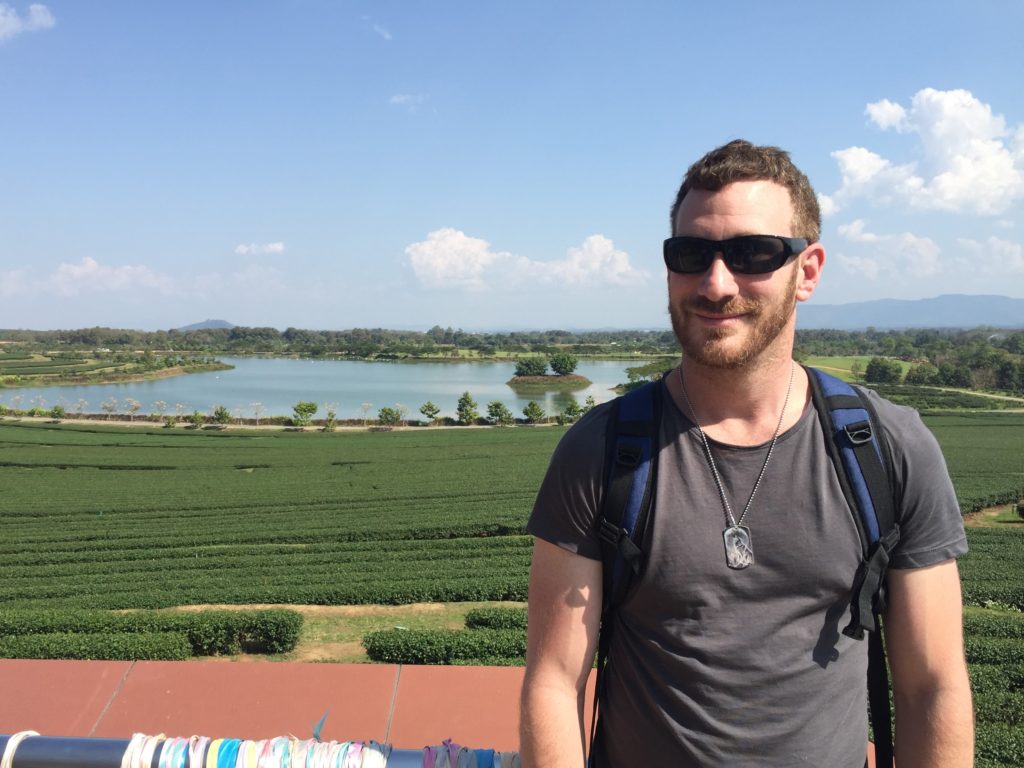 Next I went to the Karen Long Neck Village.  I had heard that this was a tourist spot and thought it would be cool to see.  I remember seeing them on the discovery channel back in the day but didn’t really know much about it until I got there.

It was around 300 Baht ($8.40 USD) for the entrance fee.  Once you get into the village, it’s really interesting to see until you suddenly realize this is more of a human zoo.  I got the sense that the villagers were being exploited.  The only way they make money is by selling souvenirs to tourists, but I felt as if the money wasn’t going to the village.

Some of the younger kids were really intelligent and beautiful and we had some nice conversations.  Even though they got sidetracked by trying to sell me something every couple of minutes.  I left here with a few mixed emotions.  I wasn’t sure what was really going on there.  There were no males except small children and the one guy who accepted the payment.  I was a bit confused until a friend sent me this article on the history of the longneck hill tribes. 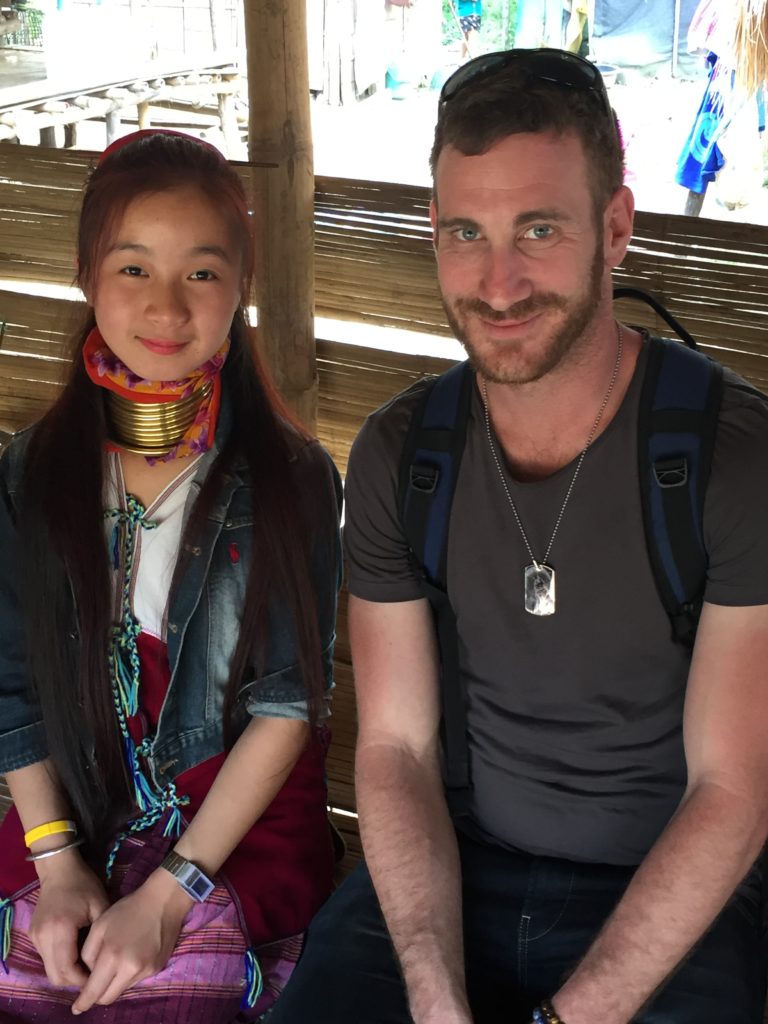 As I was leaving to go back to the hotel, I noticed a temple on top of the mountain adjacent to the Karen Long Neck Village.  I actually took a detour and rode up the mountain.  There were so many cool things about this place.  Mainly the really cool decor.  There was a golden monk right next to a white rabbit statue.  You see a bunch of seated white Buddhas sitting in a circle.  The view was absolutely stunning.  And yet I don’t the name of it and it’s not a tourist attraction.  It was basically abandoned.

I tried searching for it after I left in case I ever wanted to go back.  It’s nowhere to be found.  The good news is I do know how to get there.  At any rate, this is the cool part of having a motorbike is you can see this kind of stuff on your own that would have otherwise gone unnoticed.  If you know the name of the temple I’m speaking of leave a comment or send me a message.  Thanks! 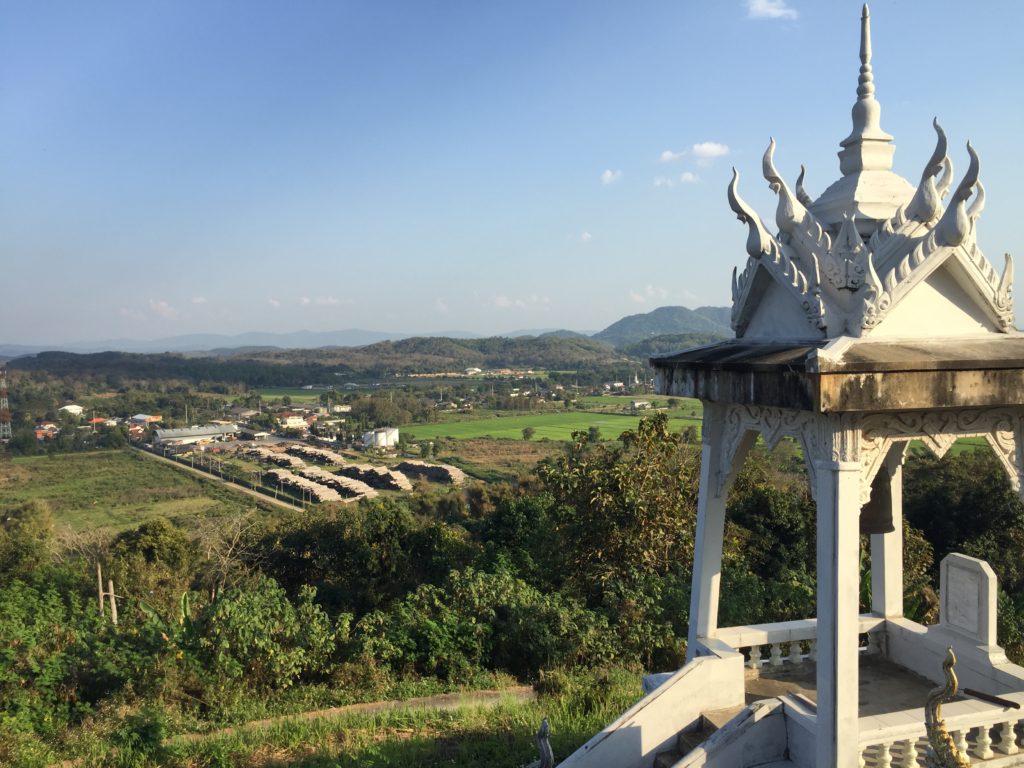 The next morning I squeezed in a few more things before the long journey back to Chiang Mai.  I really didn’t feel like seeing another temple after just seeing The White Temple the day before.  I didn’t think anything would really compare, but I was told to check out the Blue Temple, so I did. 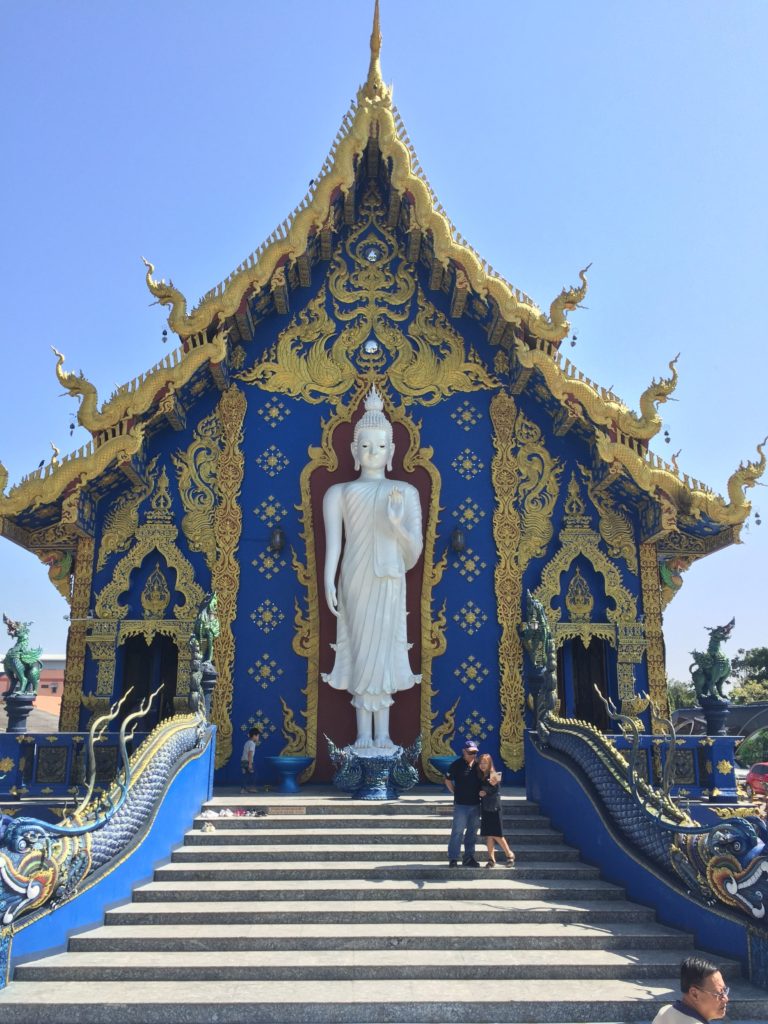 The Temple was completed just over a year ago.  It’s brand new and it actually wasn’t bad.  It was built by a student of Chalermchai Kositpipat, the artist who built the White Temple and clocktower.  Pretty cool site to see.  The entrance is free if you want to see it, but there really is no transportation that goes here.  You either need to hire a tuk-tuk or have your own vehicle. 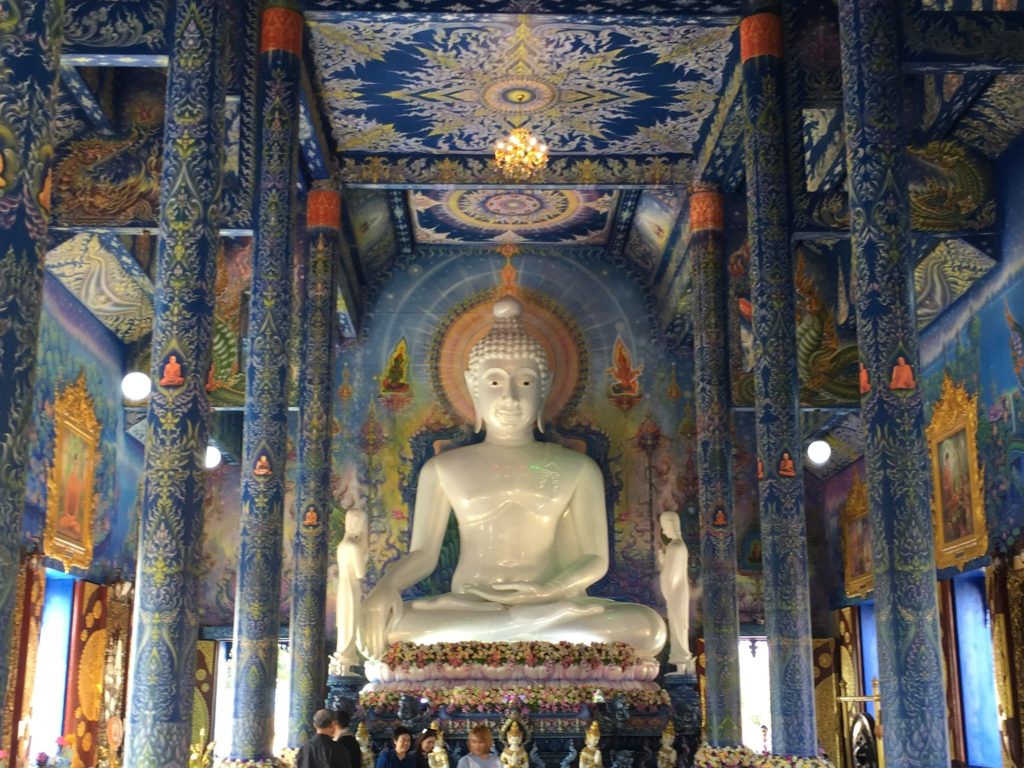 The Black House was my last stop on my way out of town.  The complex is composed of about 40 structures of all shapes and sizes.  This is to house the artworks of Thawan Duchanee, a national Thai Artist.  His art can either be elegant and sophisticated or dark and creepy.  It’s almost like something you’d see out of a science fiction movie.  The first thing I noticed was the amazing murals he painted, the alligator skin used as table runners laying on all the furniture, and the unordinary amount of phallic objects.  This was very interesting.  I’d recommend a visit if you ever find yourself in Chiang Rai. 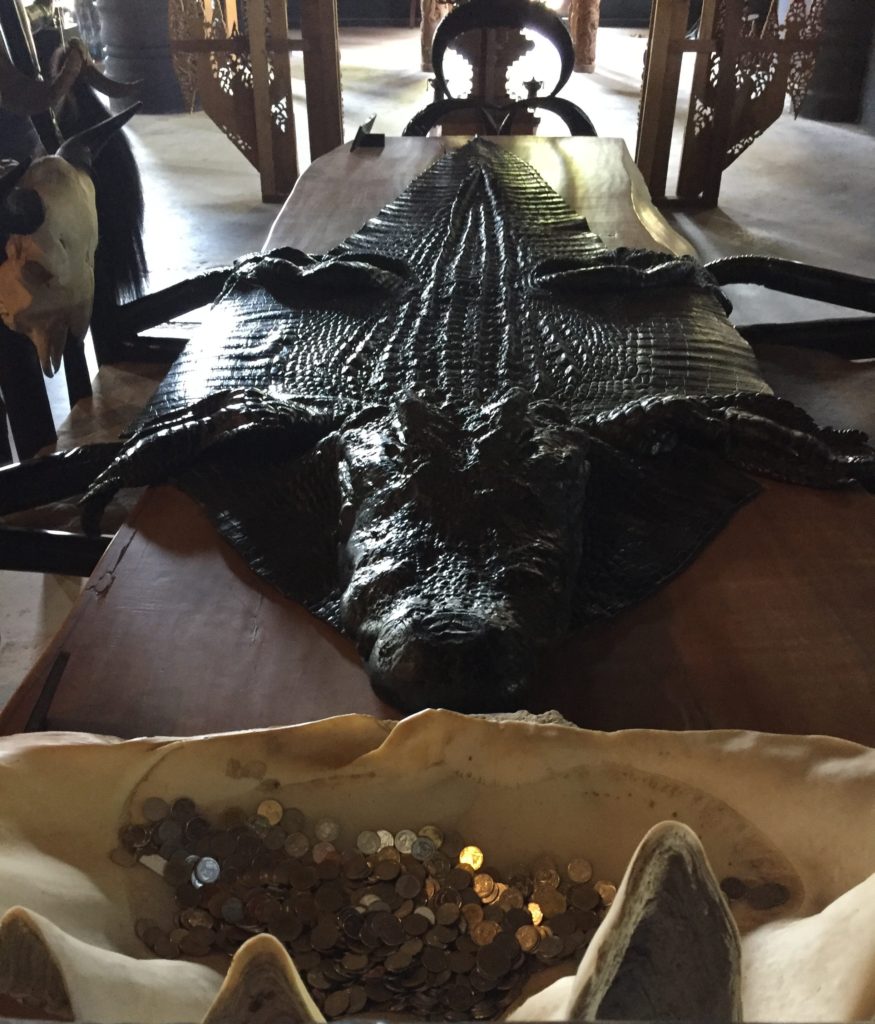 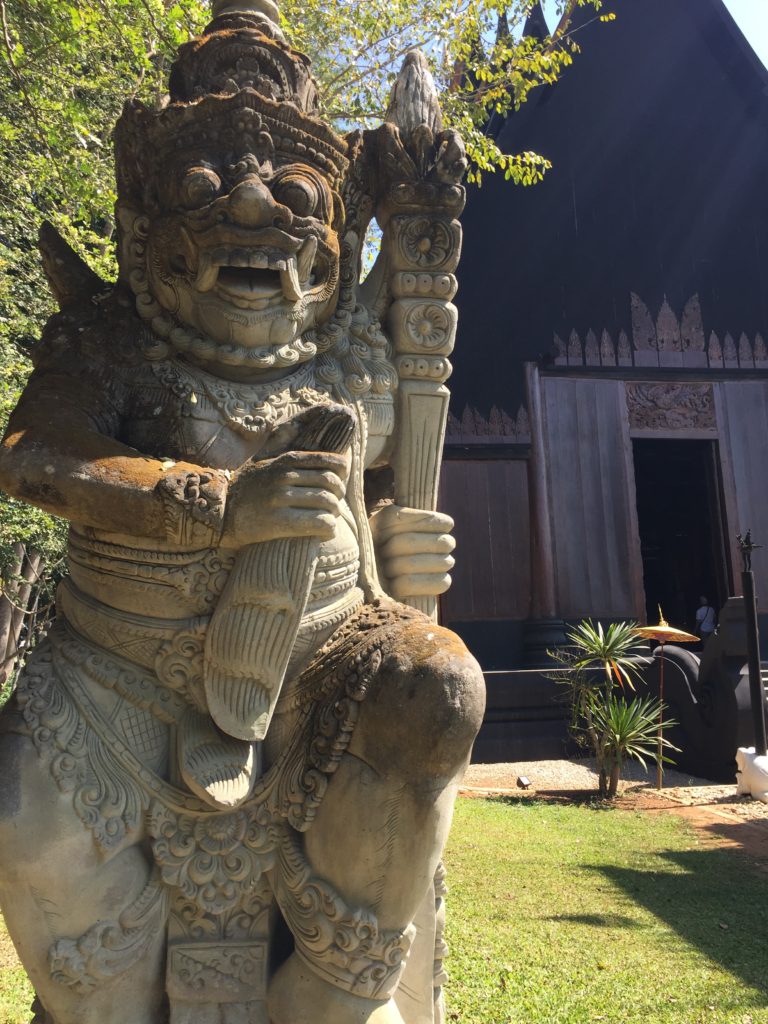 The entrance fee is 80 Baht ($2.24 USD).  It’s best to hire a tuk-tuk or take the bus adjacent to the night market to get there unless you have your own transportation.  Another option is to book a tour with a local company that includes a stop here.

Although my visit was short-lived, I really enjoyed Chiang Rai for so many reasons.  The people were extremely nice and friendly and I felt like I was treated better than the other cities I traveled to in Thailand.  If you’re backpacking or just seeing the sights, it has lots of things to see that are equally beautiful as they are fascinating.  The street food is among the best I’ve had.  Most importantly, the weather was absolutely perfect. 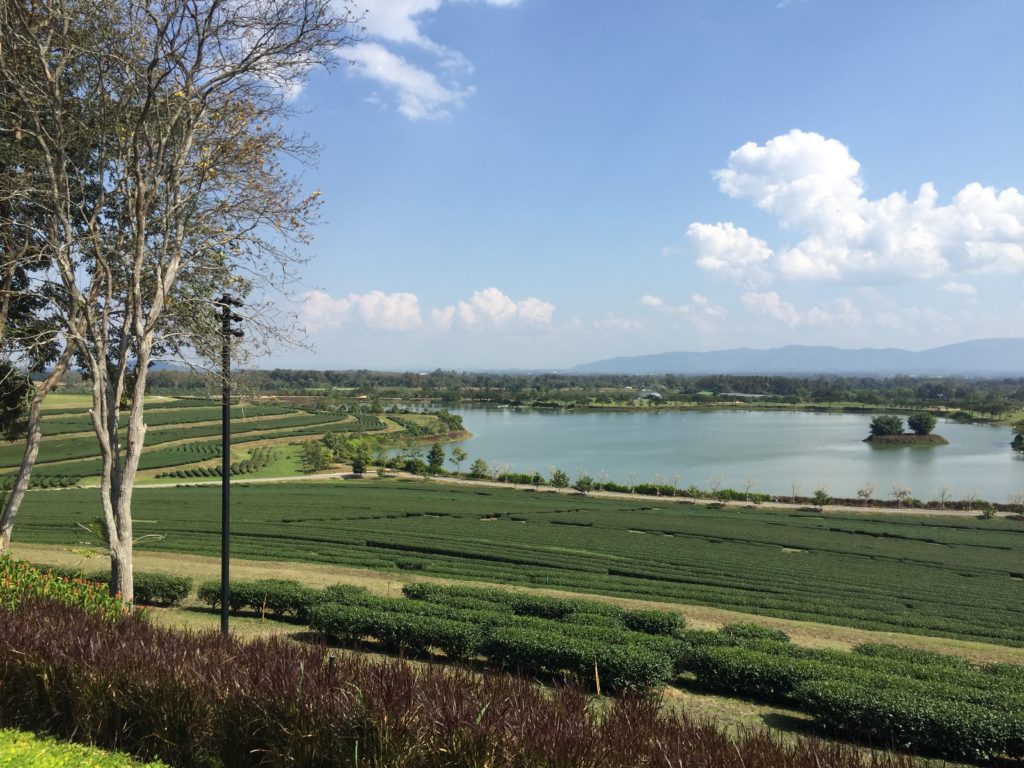 What about you?  Have you been to Chiang Rai?  Are you considering a trip?  Anything you’d like to add?  I’d love to hear from you.  Leave a comment below! 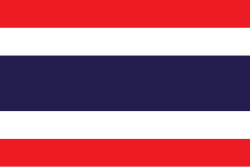 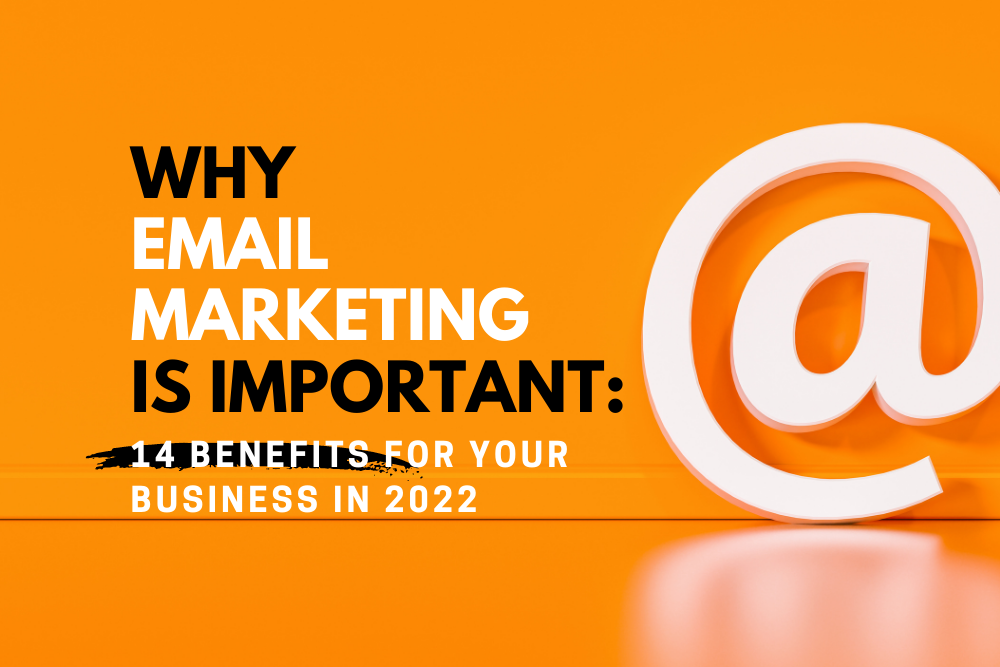 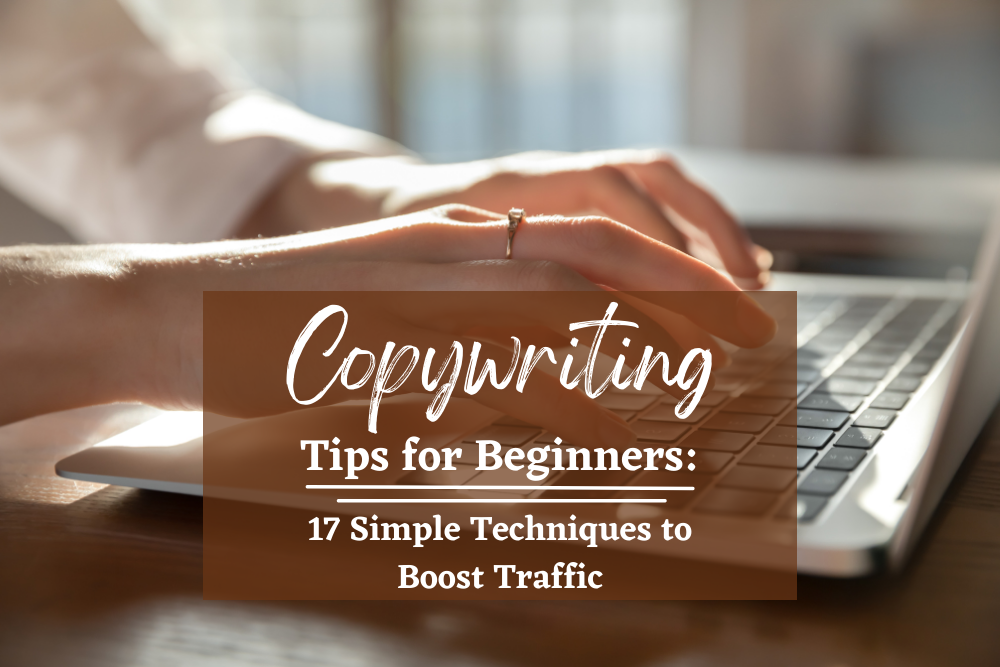 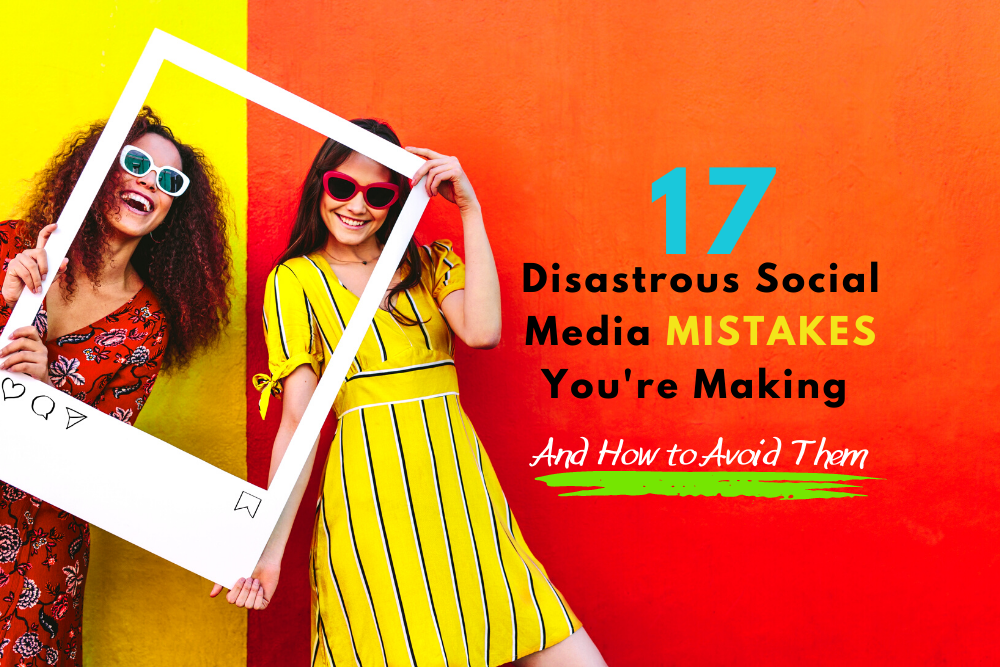 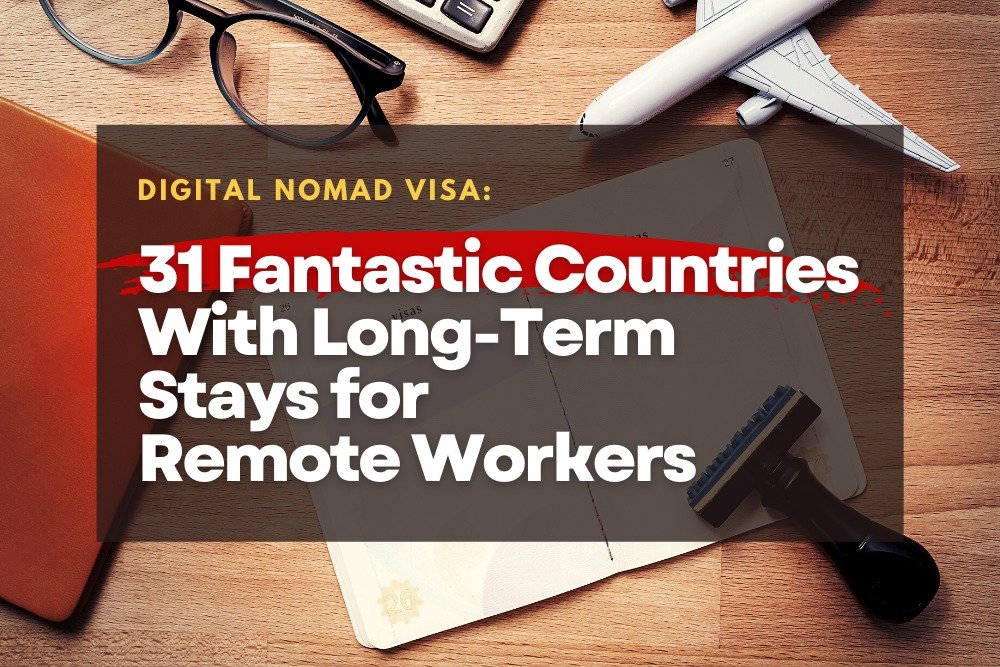 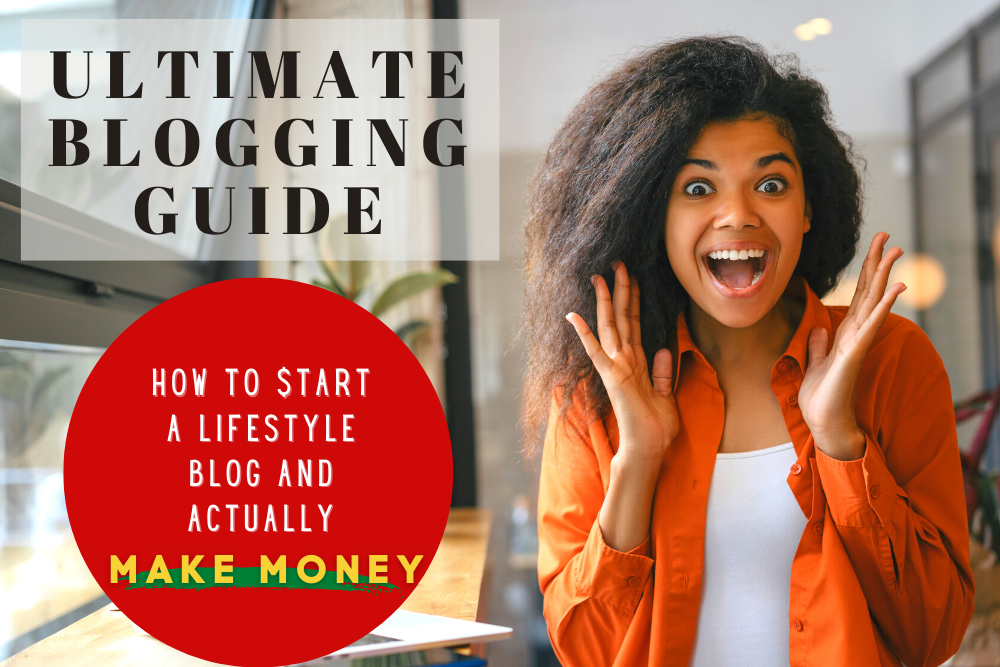 🤯 They lied: Knowledge isn’t power! We all k

Are you bored out of your mind? 🥱 Swipe right

This website uses cookies to improve your experience while you navigate through the website. Out of these cookies, the cookies that are categorized as necessary are stored on your browser as they are essential for the working of basic functionalities of the website. We also use third-party cookies that help us analyze and understand how you use this website. These cookies will be stored in your browser only with your consent. You also have the option to opt-out of these cookies. But opting out of some of these cookies may have an effect on your browsing experience.
Necessary Always Enabled
Necessary cookies are absolutely essential for the website to function properly. This category only includes cookies that ensures basic functionalities and security features of the website. These cookies do not store any personal information.
Non-necessary
Any cookies that may not be particularly necessary for the website to function and is used specifically to collect user personal data via analytics, ads, other embedded contents are termed as non-necessary cookies. It is mandatory to procure user consent prior to running these cookies on your website.
SAVE & ACCEPT
1 shares